We met Troy Hedspeth at Master Sound Studios in Virginia Beach. We had no idea how his backup vocals would work with our sound but under the careful guidance of Rob Ulsh we were about to find out. “Let’s go through it a few times and see what works Lee” ~ Troy. This was the beginning of our sessions together, it started easy and just kept getting easier. We’re so grateful to include Troy’s harmonies on our songs and love working with him, passion pours out when he sings. Thanks so very much for joining us Troy!

Troy started singing at the young age of 10 years old. Born and raised in Virginia Beach, he spent the next eight years touring up and down the East Coast singing country music in everything from small county fairs to major concert venues. During that time, Troy opened for dozens of major national recording artists such as Faith Hill, Lonestar, and even Garth Brooks.

Troy studied at Belmont University right in the heart of the music scene of Nashville, TN.  It was there that he discovered his love for a wide variety of music and how to take more of a leadership role in music directing and band directing.

In the 15 years since college, Troy has made his career in music and creative endeavors. He is still a staple of the local music scene, performing for thousands of people in a multitude of venues. Troy also loves to help others with his gifts. From music directing in church to spending time in the studio, Troy has stayed busy working with many companies and artists to successfully reach the vision of their projects. 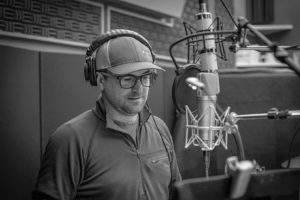 BROTHERS music may not be considered country, but there is a considerable amount of country within it. Troy belted out some fine Tennessee harmony for us that sounds mighty comfortable. We’re proud to have a passionate singer like Troy on our album, he’s not only gifted but also a real pro. Thanks so much for your contribution Troy!

Reporting Faithful Kate News when and where it happens.

We realize the track is a little rowdy for Americana,…